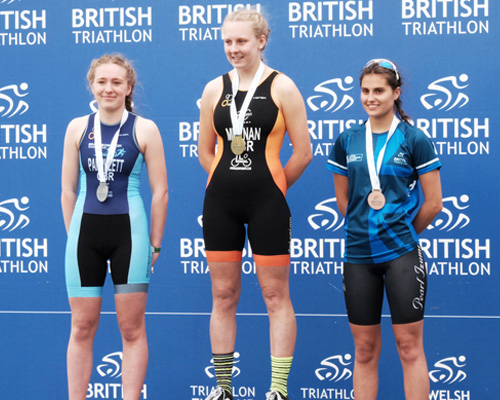 Due to the extreme weather, this championship event was changed from a triathlon to a duathlon. Katie, one of Beachborough Triathlon clubs older junior members competed in The British Triathlon Sprint Age-Group Championships in the U20s category and won silver!

Katie has kindly sent us a race report from her day:

“I only really entered this event for practice as my distance has increased this year. I have gone up from youth age group to junior (age 16-19). This means I now have to race sprint distance which is 750m swim, 20 km bike and finish with a 5 km run. As we were travelling up to Nottingham with my younger sister I decided to enter the draft-legal sprint distance British Triathlon Championships and give it ago!

I warmed up well and headed to the start line a bit apprehensive as duathlons are not my favourite! When the horn went all the girls set off at a good pace, however, it wasn’t as fast as I expected, so it felt quite comfortable. I found myself up with the lead pack as we headed down the second half of the 1.5 Km run. I came into transition in 2nd place and quickly changed my shoes and headed out with my bike. The course was straight out and back with two dead turns. I managed to secure myself into the front pack, which I was pleased with. On the final lap, a girl in front braked too hard going into the dead turn and came into my path. I, in turn, had to brake which made my back wheel come right off the ground – My life flashed before me as I thought I was going down too! Somehow I managed to stay on two wheels and avoid the girl who was now on the floor. Unfortunately, by the time I got myself back together the main pack were now too far ahead, so I tried to stay calm and joined the closely following 2nd pack, finished the lap and headed back into transition.

After a quick shoe change into my trainers, I ran out onto my final 4.5km run (3 laps). After the first lap, I wasn’t feeling good! But I heard mum shout that she thought I was in 3rd place. It’s hard to know where you are as there are older age groups on the course at the same time. I picked up my pace and headed around for my 2nd lap. I managed to stabilise my breathing and I began to feel stronger again. On the last lap, I started to gain on a few girls ahead and overtook them. I was so pleased when the results came up and said I was 2nd in my age group which meant I had won a silver in my age category!”