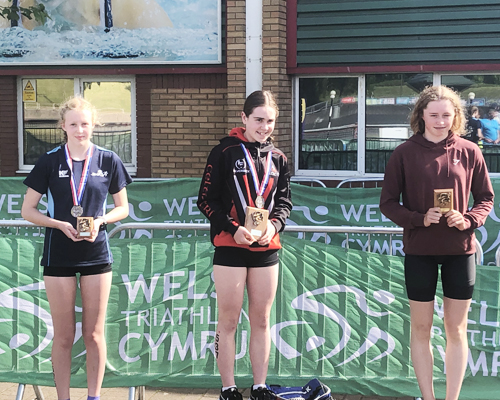 What a great start to the season for Lottie as she takes two podiums in her first two races. Well done all your hard work and dedication is paying off!

On the 28th May I did the Cheltenham Junior Triathlon. I was the only person from Beachborough and it was my first triathlon in Youth. The 400m swim was in a very big outdoor 50m pool, there weren’t many in my race so I had my own lane. I was 2nd out of the water and ran to transition which was right next to the pool. My 1st transition was good so I left in first place and was onto the bike course. The bike was on grass and it was also a technical course. The bike in total was 6km which meant I had to do 12 laps which did get a bit tedious! Once I had done my 12 laps I dismounted and ran about 100m with my bike back into transition. Then back out again to the run course. The run was on the inside of the bike course and I had to do 6 laps to make it a 3km run. I finished 1styouth girl.

On the 11th June I travelled to Cardiff for the Cardiff Junior Triathlon which had a good entry at Youth level. The swim was 400m in a pool and then to transition one. I was in wave 19 so started last, but in my wave I came out of the swim 2nd. I had a good transition and left transition 1st. The run to the bike track was about 200m and involved a 180 degree turn to get onto the bike track. The bike leg was on the Maindy Velodrome where Geraint Thomas trained as a junior. It was a 450m track which I had to do 21 laps of to make it 10km. It was a fast bike and I had to go up onto the bank to overtake. After my 21 laps I dismounted and went to transition two which was on the middle of the track. From there I entered the run course which was a 200m track which I did 15 times to equal 3km. I won my wave and finished 3rd youth girl and 6th overall.