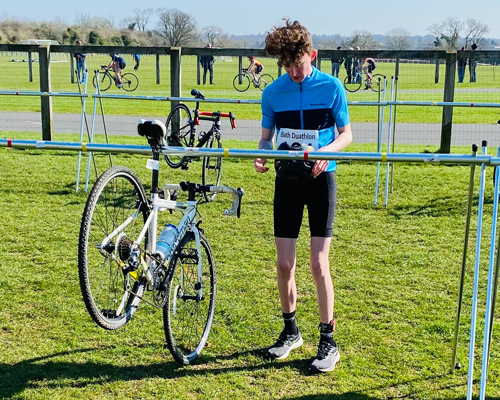 Last weekend I did my first Duathlon in Bath. We were really lucky with the weather, the sun was shining but it wasn’t too hot either.

When we first arrived I went to register and collect my race number. Then I cycled around the cycle route with Sam Davis, he talked me through any concerns I had which were really helpful.

I then took a look at the running course, it was supposed to be really muddy but it wasn’t too bad. After that I took my bike over to set up for transition, the Marshall there was really helpful and went through it all with me so it was clear in my head where I was coming in and exiting out and also how to hang my bike on the bar!

I thought I’d be a bit nervous at the start of the race but I was feeling fairly confident, however, the running was harder than I thought so I did find that a challenge but I pushed through. When I got on my bike I really started to enjoy it. It was quite hilly and with the wind as well, I had to push hard. My transition went well getting off, I did get a bit confused in finding a place to hang my bike. The final run was tough but I finished and felt very proud of myself.

Thank you so much for all the support I received from all the other Beachborough Tri Club members that were there and the parents, everyone was so encouraging.

I’m looking forward to my first Triathlon in April now!