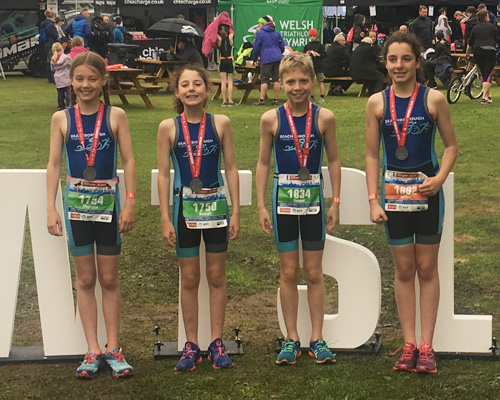 This weekend a few of our Beachborough triathletes travelled north to the iconic World Series Triathlon event in Leeds. Racing at the same venue where Elite triathletes – such as the ‘Brownlee’ brothers race on the same weekend!

Our members were racing against a top quality field, many of whom were trying to qualify for their regions to compete at the IRC finals in September.

An 8am start saw Larissa Campbell compete for TS3 girls. Her 20th place disguised her fast pace after some dirty tactics from other competitors in the mass start. She showed great resilience, stayed calm and worked hard to move up the field.

Sam Davies was next up in the boys TS2 coming out of the swim in a strong 14th. A consistent bike and an outstanding run saw him gain position finishing in 10th out of 44 competitors.

After a short rain shower making some of the bike course a bit slick, it was the turn of Daniel Roberts & Louis Bushby. In a strong field of 72 youth boys, Daniel came 7th and Louis 49th. Luckily both managed to avoid the bike crashes on the slippery course!

Next Saturday, some of our Beachborough members head north again, this time to Nottingham for a chance to qualify for a South Central place in the IRC championships. We wish all those competing the best of luck!

Let’s not forget on Sunday it’s the Beachborough Triathlon at Stowe School. We need helpers/volunteers to help run our home event, so if you haven’t put your name down – please contact Hester asap!

Good luck to ALL next weekend!