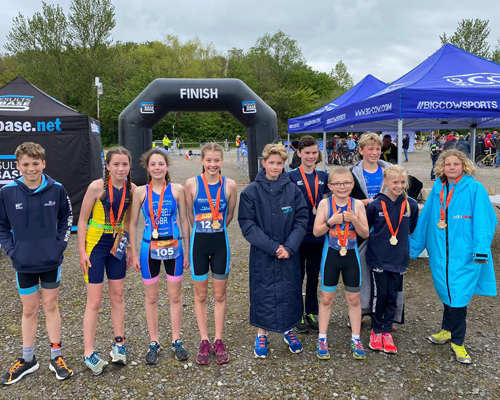 Despite a wet morning, many members of the club made their way to the Bowl in Milton Keynes to compete.

Three TS1’s were the first to compete in a group of 37 competitors. For these three, it was their first ever race for the club. There were lots of smiles while waiting to start and while racing they were cheered around the course by other members of the club. They all showed great determination and their transition between run and bike looked good resulting in strong performances in the race. Congratulations to Bea who came second overall in the girls’ category, Katie who finished 6th girl, and Stanley who finished 14th boy.

The next race run was for the TS2’s had a field of 49 competitors. Right from the start, this was a fast race and those competing needed to remember to count laps in order to complete the correct distances. Fast running and smooth transitions saw some excellent performances. Congratulations to Mollie who finished 3rd girl in her first year in TS2. Special mention should go out to Ellie who finished 20th despite falling while dismounting her bike on the slick road. In the boy’s race Jessie finished a strong 9th and Joshua 22nd.

The final race that Beachborough was represented in was the TS3 race which had a field of 47 competitors. The fast paced, runs and bike saw some fabulous racing from many athletes that have represented their region at the IRC. Congratulations to Charlotte and Hannah who finished first and second girl respectively in their first year of TS3. A job well done to Ruadh, who has not competed in a while, who showed great determination finishing 16th girl. In the boy’s race Thomas finished 10th, Jarryd 13th, Leo 17th and Harrison 22nd they all worked really hard and put a lot of effort into their races.

Thank you to all the parents for driving us to the race and supporting all the athletes during their races.