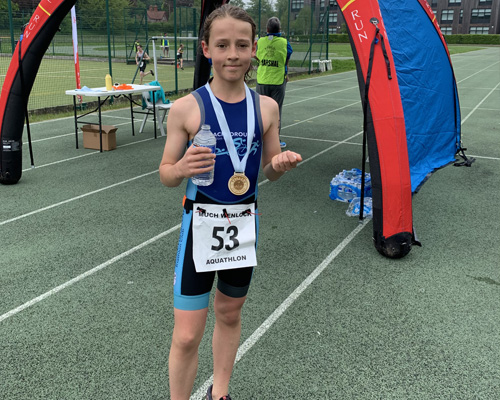 This was Noah’s first race of the session, having had to pull out of two races due to a fractured wrist caused by saving a goal on Easter Sunday! And was also his first TS3 race.

It was a very small event and it took us over one & half hours to get there and was a chilli overcast morning. Despite it being a small event it was great for Noah to get his first TS3 race under his belt to settle any nerves and also get used to the new longer distances he has to complete at! The distance was a 300m pool swim & 2.4km run on a mix of grass and athletics track.

Overall, he enjoyed the experience and was glad that we had made the long journey, not only for the race but we also found out that the current modern day Olympics were inspired by the Wenlock Olympic Games and the London 2012 Olympic Mascot Wenlock was named after the towns history with the games!